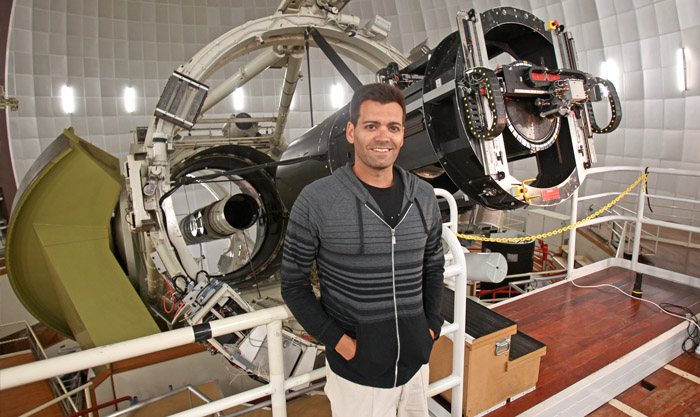 Astrophysicist Ángel R. López-Sánchez writes on our Star at his blog The Lined Wolf (Astrophysics, Astronomy, and Science) Thanks, Ángel.

How many words are out there? To date, we know the existence of 1958 planetsorbiting around stars different to our Sun. These objects are defined as “exoplanets”: astrophysicists estimate that our Galaxy, the Milky Way, would host trillions of planets.

How do we name the exoplanets? Almost the 100% of these names are not proper names but a designation given by letters and numbers coming from star catalogs, such as Kepler 88b or OGLE 2015 BLG 0966b. Following the convention adopted by the International Astronomical Union (IAU), an exoplanet’s name is normally formed by taking the name of its parent star and adding a lowercase letter. The first planet discovered in a system is given the designation “b” and later planets are given subsequent letters. For example, the second planet discovered around star HD 7924 was named HD 7924c. Indeed, these names might be convenient… but they are not easy to remember by the non-astronomers. 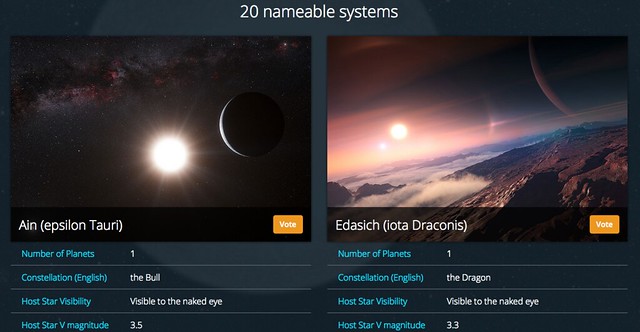 In 2014, following a recommendation of its Working Group “Exoplanets for the Public”, the IAU decided to put real names to a few of these exoplanets and their parent stars. By April 2015 a 20 ExoWorlds list is published in theNameExoWorlds website. The IAU proposes astronomical clubs and non-profit organisations to send proposals to put proper names to the 15 stars and 32 exoplanets which are located in these 20 planetary systems (some stars already have proper names, such as Fomalhaut or Pollux). These organisations only have to follow some easy IAU’s rules to name stars and planets. In August 2015, during the IAU XXIX General Assembly in Honolulu (USA), a massive press release at a special public ceremony announced that the general public can vote to rank the proposed names to these 20 planetary systems following the internet address:http://nameexoworlds.iau.org/exoworldsvote

The hashtag is #NameExoWorlds and the deadline for this is next 31st October. The IAU is expecting a million votes or more worldwide. You can cast your vote just visiting that website, reading the name proposals for each planetary system, and clicking in “Vote” in your favorite option. Only a vote per device and per planetary system in allowed however you can emit your vote using different devices (i.e., laptops, tablets and smartphones).

One of the planetary systems that the IAU proposes to give proper name is that located around the star mu Arae (μ Arae). Mu Arae is a star similar to the Sun, located at around 50 light years from us, in the Ara (the Altar) constellation. Mu Arae is slightly older than the Sun (astronomers estimate it has an age of 6.3 billion years), it around 10% more massive than the Sun but around 90% more luminous that the star of the Solar System. We have know for many years that Mu Arae has four planets: mu Arae b, c, d and e. The Sociedad Española de Astronomía (Spanish Astronomical Society, SEA) is promoting the proposal of names given to the star mu Arae and its planets by the Planetarium of Pamplona(Spain). They proposed to name mu Arae as Cervantes, and its planets with the names of the main characters of the Quixote: Quijote (mu Arae b), Dulcinea (mu Arae c), Rocinante (mu Arae d) and Sancho (mu Arae e). This proposal, with the hashtag #YoEstrellaCervantes, is also supported by the prestigious Instituto Cervantes, the public Spanish institution that promotes the Spanish language and culture around the world. The “Instituto Cervantes” has headquarters in 90 cities of 43 countries, Sydney included.

Artistic representation of star mu (μ) Arae and its planetary system. The #YoEstrellaCervantes initiative proposes to name this star as Cervantes and its planets Dulcinea, Rocinante, Quijote and Sancho, following the main characters of Don Quixote (“Don Quijote” in Spanish).
Credit: http://estrellacervantes.es.

If you like the #YoEstrellaCervantes initiative, please vote for it going to this webpage:

and clicking in the “vote” button for Cervantes. You can also ask your friends and relatives to vote #YoEstrellaCervantes and help put names to these 20 planetary systems. You can cast an unique vote per system per device (laptop, computer, tablet, smartphone). Remember the deadline is next 31st Oct.

The website http://estrellacervantes.es/ compiles, in Spanish, all the information about #YoEstrellaCervantes, including news and related activities. One of my favorite initiatives was created by Laura Morrón in collaboration with comic illustrator Jordi Bayarri and teacher Juan Carlos García-Bayonas. They developed a comic and great didactic material to promote #YoEstrellaCervantes in the classroom. Their material put together Science and Literature with the aim of approaching the #NameExoWorlds and #YoEstrellaCervantes initiatives to young students (and their parents).

Where is mu (μ) Arae located in the sky? This star belongs to Ara constellation (the Altar), a region of the Southern Sky between Scorpius (the Scorpion) and the Triangulum Australe (the Southern Triangle). Hence, this constellation cannot be seen in the majority of the Northern Hemisphere (although it was already described by the 2nd century astronomer Ptolomey as one of the 48 Greek constellations). Seen from the Southern Hemisphere, this region of the sky is spectacular. Mu Arae has a visual magnitude of 5.2, therefore, although being a faint star, it can be seen with the naked eye from dark place. However, because of the huge number of faint stars found within these constellations (which are located very close to the Galactic Plane), it can be a bit hard to accurately identify mu Arae under a very dark place, far from the light pollution. 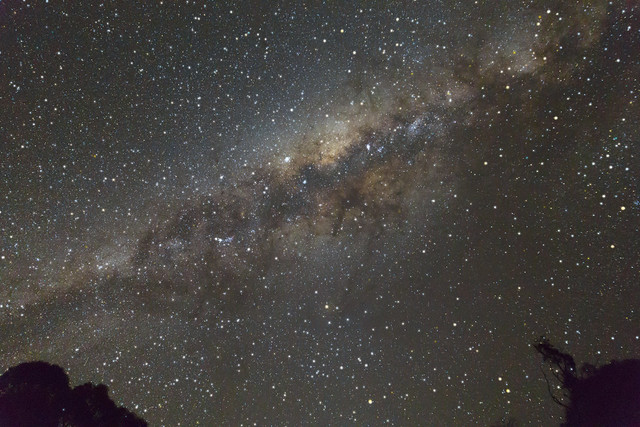 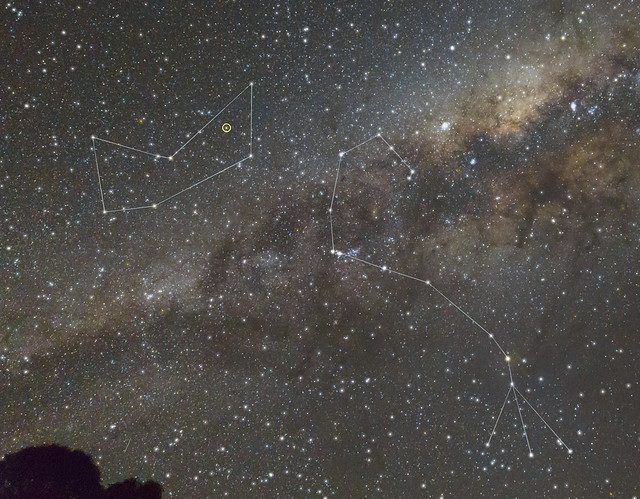 A zoom-in of the previous image shows the location in the sky of the constellations of Scorpius (Right) and Ara (left). Star mu Arae is identified by a yellow open circle.
Credit: Ángel R. López-Sánchez. 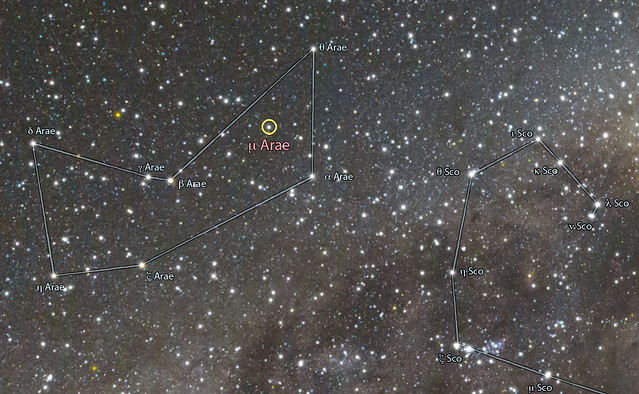 Another zoom-in of the image now only shows the details of the Ara constellation and mu Arae surroundings. The brightest stars in Ara and in the tail of Scorpius are also identified.
Credit: Ángel R. López-Sánchez.

Today, September 29th, is the (assumed) anniversary of the birth of Don Miguel de Cervantes Saavedra. Using this as a driver, the SEA has released the campaign ¿Te atreves a regalarle una estrella a Cervantes? (Why don’t you give a star to Cervantes?), that aims to promote the #YoEstrellaCervantes proposal for star mu Arae. We are asking citizens around the world (and not only Spanish-speakers, but of course mainly orientated to them, as the majority it is in Spanish) to help us to get the hashtag #YoEstrellaCervantes trending topic in social media today. Besides casting your vote, please share #YoEstrellaCervantes in your social network to reach more people.

The book “The Ingenious Gentleman Don Quixote of La Mancha” (“El ingenioso hidalgo don Quijote de la Mancha”), or just Don Quixote (“Don Quijote” in Spanish) was published in two parts in 1605 and 1615. Hence 2015 marks the 400th Anniversary of Don Quixote, which has been considered one of the most influential works of literature, one of the best works of fiction ever written, a classic of the Western literature, and to be the first modern European novel. The initiative #YoEstrellaCervantes is a beautiful project that puts together Science and Art (Literature) and a tribute to Don Miguel de Cervantes and his work. If Shakespeare already has his works in the heavens (the majority of the Moons of Uranus are named after characters from the works of William Shakespeare), why hasn’t Cervantes?